Don’t Call it A Comeback 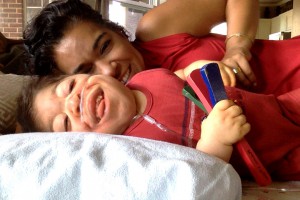 LL Cool Jay used to have a song back when I was a high school and in the lyrics he said, “Don’t call it a comeback!  I’ve been here for years!”  I think that symbolizes that someone can be quiet and small but they can still be working hard behind the scenes making great things happen.

Well that’s exactly what my youngest son Dorian has been doing this past week.  Amid new school orientation meetings, 6th grade football practices and homework for my older sons Ben and Alex, our boy Dorian has been working hard on the biggest battle of his life.  On Friday August 7th we took him to the ER for respiratory distress.  Turns out he had toxic levels of carbon dioxide in his lungs (due to his inability to properly exhale) and within hours we were given the devastating news that “he may not make it through the night”.

As parents we were frightened and saddened by how quickly his health had deteriorated.  There are no words to describe the level of hopelessness you feel when you think you are spending the last precious hours with your child.  But in typical Dorian fashion, he battled through the night surrounded by my husband and I cheering him on every minute until the sun rose the next morning.  Every day after that his carbon dioxide levels kept dipping closer and closer to the safer zones.  Here we are 11 days later and he is home and happy as ever.

You can call him The Comeback Kid, you can call him an I-Cell Warrior, or you can call him Superman — no matter which you choose, you would be right.  Like my husband told me on that Friday night on August 7th “I’m not ready to have my last night with Dori”, neither was I and thankfully neither was Dori.  He is small but he has the determination of a gladiator.  This mama couldn’t be any more proud of her little fighter.  Oh yeah and by the way… that LL Cool Jay song I referred to?  It’s “Mama Said Knock You Out”… keep on fighting Dori!  Keep on smiling!  Keep on knocking em out!