My dad came to the United States from Colombia as a professional wrestler in the 1960’s.  He barely spoke any English and was armed with only an elementary school education.  My mother came from Nicaragua and even though she had accomplished a post graduate education from Nicaragua, due to her limited English her only option at the time was to be a nanny and housekeeper.  Through the years they always had amusing stories of those initial tough years when they were learning English; they had a knack for making up words that sounded like English but weren’t. (For Spanish Speakers:  During my mom’s first week in the US my mom got terribly lost in San Francisco from riding around on the trolleys.  She couldn’t put together a coherent sentence in English but she tried her best.  She told a police officer that she found, “Mr. Poli, I’m Perdi!”)

Fast forward through the years of getting married, working hard, having kids, becoming American citizens and being leaders in their community, they touched many lives.  Still to this day their lives inspire me.  Today I opened a stack of mail and found this letter.  It gives me goosebumps to know that a Colombian with barely an elementary school education, and a nanny from Nicaragua would have a scholarship endowed in their memory by their own children. This scholarship is specifically for first-generation college students, students that are just like my sister and I were with all the hopes and dreams of the ancestors before them on their shoulders.  My parents would be so proud seeing that their legacy is helping put other kids through college, one young man and one young woman at a time.

I’ve been saddened to see all the post-election hatred that has oozed its ugly head into the spotlight over the past week.  I rather stick my head in the sand and focus on all the people like my parents that worked hard to make their community a better place.  Opening up this annual scholarship report from my alma mater gave me hope; a palpable hope that I can’t even put into words because it is clear evidence that life does indeed go on, good eventually comes out of bad, and the future is bright if we choose to shape it that way.  So I hope all the negativity in the news and social media doesn’t dampen your ability to dream, because if my spanglish speaking parents can have a scholarship in their name– anything is possible. 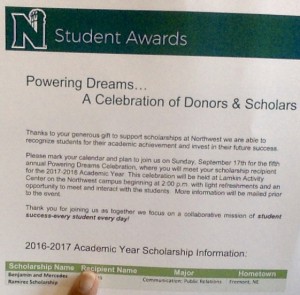